You are here: Home | SHORA 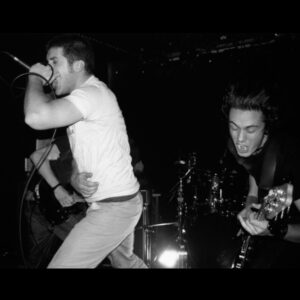 It was in 1998 in Geneva that Tony Casimo (bass), Rodrigo Cortesao (vocals), Alessandro Curvaia (drums), and Nicola Todeschini (guitar), then aged 16 to 20, united their wills to form what would become Shora, a hardcore band often described as chaotic.

Having started under the name of Engine, the band spends a few months rehearsing in a tight space before recording their first demo, whose three tracks reveal a musical identity yet to be further defined, oscillating between different registers, with multiple influences from metal and hardcore bands. In spite of salient traits of immaturity, the compositions exhibit compelling passages and show a certain potential.

The first shows follow one another. In the fall of 1998, the group seeks to be more original and succeeds by composing two new pieces which clearly stand out from the others in terms of originality and quality, both served by a structure moving away from the standard verse-chorus-verse structure, and which manage to dilute their previously obvious influences.

A turning point will come when they present these new pieces at a concert in early 1999,for which they receive very positive feedback. In the audience stands Roderic Mounir, Knut’s drummer, who contacts them three days later to invite them to open for his band at an upcoming show. After that concert, the members of Engine then gradually integrate into the midst of the Genevan scene; through their new encounters, they discover the underground side of the hardcore sphere, and thereby an infinite number of records they did not know.

Realizing the lack of originality of their name, the group decides to change it to something more unique. They invent “Shora”.

Shortly after, they receive a proposal from the Genevan label Snuff Records to release a 7-inch. Following a suggestion from their friend Vincent de Roguin, the band decides to split both sides of the vinyl with Born Under Saturn, a hardcore band from the US whose demo they had heard. The object, recorded by Thierry Van Osselt, former bass player of Knut, and pressed in 500 copies, is released in the summer of 1999. The disc then begins to circulate in neighboring countries and the feedback is enthusiastic. A local media speaks of “a new sensation of the Genevan hardcore scene”, and in Germany, the disc falls into the hands of Patrik Steinhauser, head of Grave Romance, who offers them to release their next record.

Shora performs in August their first concerts abroad, with a repertoire still lacking stylistic unity. During the creation phase that follows, the group resolves to abandon conventional song structures in favor of compositions made up of single parts, rapidly flowing one after another. As a result, the pieces become more radical and unpredictable.

The new compositions once completed, the group chooses to have them recorded in March 2000 at Rec Studio by Serge Morattel whose work they had heard on a relatively confidential EP by Knut. The result will be a seven-track EP dubbed Shaping The Random – five compositions and two electronic pieces – for a total duration of only 16 minutes. The tracks are short, explosive, intense, and establish the identity of the band that has found its way.

Shaping The Random is released in June 2000 in 1000 copies, to critical acclaim. Often positively compared to the biggest names of the genre, flattering qualifiers rain down: “incredible”, “impressive”, “essential”, “surprisingly mature”, or even “pushing the boundaries of the genre”. Doors open and the prospect of a bright future is felt.

The band then embarks on their first European tour with Ananda, a French group they had known during their first concerts abroad, as well as with the Germans of Inane. This step turns out to be formative: a deep immersion into the DIY hardcore network and its functioning.

The most unexpected is yet to come and it comes quickly; the group is offered another tour, this time with two of the biggest names of the genre, US bands The Dillinger Escape Plan and Botch, for a 30-date tour across Europe in professional conditions they had never known before. The group accepts the offer but cannot handle the entire tour, which they will eventually split up with Ananda. The tour takes place in November and it is the opportunity for Shora to perform in front of a much larger audience, and incidentally the opportunity to further disseminate their records.

After an eventful year, the band takes a break from playing live in order to focus on producing new material. Loïc Lepillet, who just started Bisect Bleep Industries, a new label affiliated to Overcome Records, contacts them during this period to offer them to share a record with another artist, and not the least: Masami Akita, veteran of the Japanese noise scene, better known under the moniker of Merzbow. The idea is stimulating, given the strong affinities Shora has with noise, already present on the interludes of Shaping The Random.

The group records four songs in the summer of 2001, still with Serge Morattel. While the first three tracks remain broadly in line with the previous record, the last track expresses new ambitions: much longer, more experimental, and above all more repetitive, “To Further Confines” clearly stands out from the first three tracks and augurs well for new possibilities.

The seven-track CD called Switching Rhetorics, with a circulation of 2000 copies, including a limited version in a handmade metal packaging produced to 100 copies, is released the following fall, to an ever-enthusiastic critical reception. No tour this time, the group gives a few concerts but prefers to concentrate on new compositions, although this phase is not very productive. Shora is in a transition phase, its members are afraid of repeating themselves. Two new tracks emerge from this phase, in which noise-rock influences and a much more melodic bent can be heard, yet still far from what was going to be the album Malval.

In August 2002, the band is offered to join US band Converge on the French and Spanish part of their European tour. Unfortunately, most of the band’s gigs end up being unsatisfactory, due to technical issues or because of the band not being at the top of its game.

A proposal for two shows with Merzbow follows shortly after, for two dates in France, in Poitiers and in Rennes. The idea of the event is for each artist to perform separately, and then continue with a semi-improvised collaboration. The group composes for the occasion a long monolithic piece of about twenty minutes on which Masami Akita would add a layer of his art
for a most memorable sound experience.

Vincent de Roguin, who had collaborated on the latest shows, joins the group on bass, while Tony Casimo becomes second guitarist. Rodrigo Cortesao decides after a while to leave the band, unhappy with the new songs and finding no place in them. He leaves behind a set of meaningful records in the history of hardcore, and a band ready to move on and reach new heights, which they would do two years later with the album Malval.